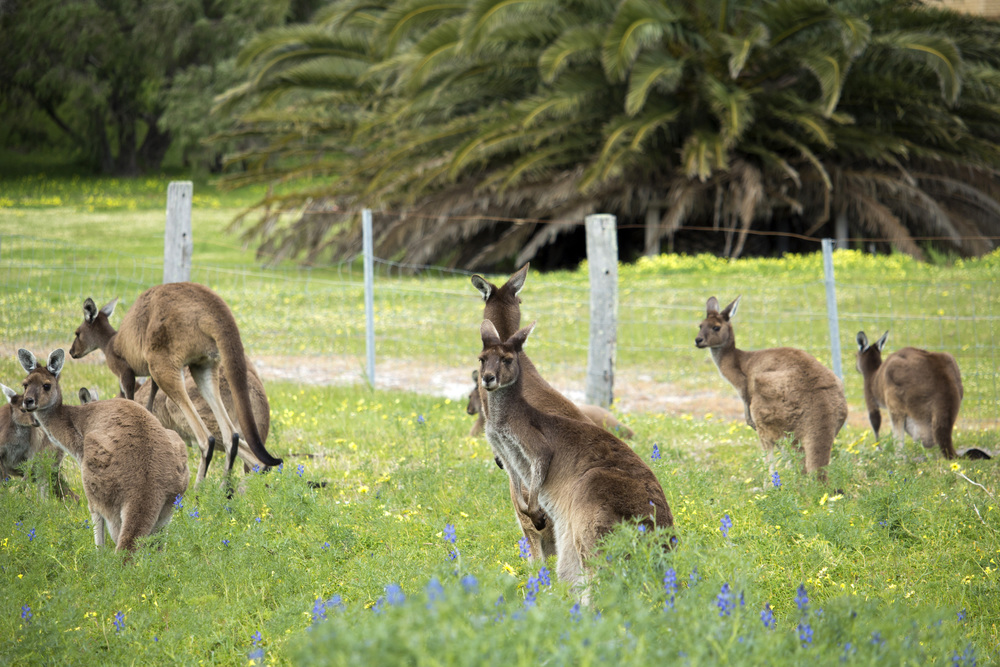 There are over 48 species of macropods (kangaroos) in Australia.  Of these only 4 can be commercially harvested for export.

Each year, National Parks Authorities survey kangaroo numbers.  Over forty years of such monitoring has allowed for the development of very accurate systems which indicate total populations and trends in population numbers. Populations rise and fall with the natural cycle of droughts and good seasons. Long term data shows kangaroo populations have been consistently rising and that current populations are well above the long term average.

Kangaroos are adapted to the highly variable Australian climate.  Their reproductive biology allows populations to rapidly increase after a drought to make the most of good seasons. Kangaroo populations with a stable age distribution are capable of increasing at a maximum rate of around 30%  in average rainfall years (Caughley et al 1987).   However, if the population sex ratio is skewed towards females or the population contains few juveniles, then much higher rates of increase (up to 50%) are possible. This may be the case immediately after a drought (Qld 2015).  This has happened repeatedly over the past few decades as demonstrated by the graph below.

I live on a farm near Cowra in NSW Australia, I am on the family property which has been held for the last 185 years. As a child growing up here we very rarely saw a kangaroo. We now have in excess of 400 kangaroos on 450ha.

I live on a farm near Tarago, NSW Australia, which has been in our family since 1947.  When my husband, now 66, was growing up, it was a rare event to see a kangaroo. Perhaps one a year was seen. I came to live here 35 years ago and it was still rare to see a roo. It is only in the last 15 years that the population has exploded.

My father in-law first came to Holbrook in the late 60’s. When he first started farming in this area it was talking point if you saw a mob of Kangaroos. Today I can guarantee anyone visiting the farms that we will see 200 to 300 kangaroos.

Over-abundant kangaroos are a serious problem for us as they are in nothing short of plague proportions. There are hundreds if not thousands and they are major pest proportions.  At the moment the situation is actually rather frightening as we have NEVER seen so many roos here ever!

WHY ARE POPULATIONS INCREASING?

Prior to European settlement, the kangaroo rangeland had very few places of surface water from which kangaroos could drink.  Hence during droughts populations would shrink back to the few available permanent waterholes.  The pastoral industry has tapped into below ground water supplies to the point where now very few points in the rangelands are further than 3 km from a permanent water source and no point is further than 10 km (Landsburg 1999)[1].  This enables many more kangaroos to survive droughts, meaning that when rains do come the population increases substantially.

Prior to European settlement, nature returned the balance to the ecosystem by when the surface water dried up during dry times and kangaroos died off. Graziers have had an unexpected effect on the normal boom / bust cycle of kangaroo numbers by establishing thousands of water bores across the area. This unnatural access to permanent water allows huge numbers of roos to survive for much longer than normal. Essentially we have altered the roos’ natural environment, leading to an unsustainable increase in their numbers.

Due to agriculture’s spread in Australia over the last century, farmers have made feed and water more abundant to run livestock, which allowed kangaroos to spread, build and sustain numbers at higher levels than was naturally achievable. Understanding their breeding cycle is crucial in their management. Their population can quickly rise to prolific numbers in a good season. However, when it becomes dry – which is quite often in Australia – those large numbers are unsustainable with available pasture and they become overstocked.